Employee or Independent Contractor? How Prop. 22 May Affect Your Claim 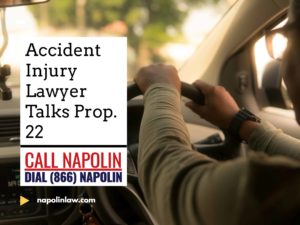 On November 3rd, 2020, California voters voters overwhelmingly approved Proposition 22 which claimed 58.56% of the vote. What about this bill fostered such fervent support? And how, if at all, could it affect your Workers' Compensation claim?

Before we can answer these questions, let's take a quick look at the motivations that led to its proposal and eventual acceptance.

California Assembly Bill 5, also popularly referred to as “AB5” or the “gig-workers bill,” went into effect on January 1st, 2020. This bill required many companies that hire gig workers as independent contractors to reclassify them as employees. Why? Section 1 of the bill helps shed light on the reasons, including:

Subsection d of Section 1 concisely explains the Legislature's intent for enacting the bill: “to ensure workers who are currently exploited by being misclassified as independent contractors instead of recognized as employees have the basic rights and protections they deserve under the law, including a minimum wage, workers’ compensation if they are injured on the job, unemployment insurance, paid sick leave, and paid family leave.”

Ultimately, this bill was a codification of the Supreme Court's landmark, unanimous “Dynamex” decision which employed a “three-prong” test to determine that Uber and Lyft drivers appeared to be employees more than they were independent contractors. Under this test, workers are assumed to be employees unless:

Following the passage of AB5, not much changed for the main companies, such as Uber, Lyft and Doordash, that the act was designed to target. These companies, which form the new foundation of California's gig economy, threatened to shut down and move operations outside of California rather than hire their drivers and cement their role as employees.

The pushback stemmed from the severe financial burden these companies argued the bill would impose on them. Uber and Lyft, for example, asserted that they were primarily technology companies rather than transportation companies and thus, they should not be responsible for complying with the costly licensing, safety check, and employment requirements which would raise the price of their services beyond what they consider to be reasonable levels. AB5 was also widely criticized by drivers themselves for limiting their flexibility to choose their own hours, one of the calling-cards of this profession.

The most expensive ballot measure campaign in the history of California soon followed the passage of the “gig-workers bill” in order to gain support for a potential remedy: Proposition 22. Under this Proposition, gig drivers would be exempt from the requirements of AB5 and could be legally classified as independent contractors. In addition, these drivers would gain eligibility for an earnings floor, conditional Covered California healthcare subsidies, limited auto accident liability coverage, and occupational accident insurance.

CJ Macklin, spokesperson for Lyft, stated “if Prop. 22 fails, hundreds of thousands of drivers could lose the opportunity to earn on Lyft entirely. That’s why we’re fighting so hard to spread our message and ensure every voter knows that a Yes on Prop. 22 will protect driver independence plus benefits.”

Together, Uber, Lyft and Doordash employed more than $200 million in the fight against AB5. Their opponents raised less than $20 million.

The unprecedented campaign by Uber, Lyft and Doordash eventually paid off as Proposition 22 was met with widespread support by Californians and subsequently passed with a majority vote. What does this mean for the countless ride-sharing drivers working across our state?

First of all, they are no longer employees. Drivers for application-based rideshare and delivery services are now seen as independent contractors in the eyes of the law. This exemption from Ab5 and reclassification allows drivers to reap the following benefits:

Proponents of the Proposition also cite the following benefits, asserting that it will:

At the expense of the above benefits, these drivers will no longer be entitled to workers' compensation benefits or various protections afforded under California Labor Law.

A Closer Look at Insurance

Under Proposition 22, network companies are now required to provide on-demand drivers (such as those working for ridesharing companies) with occupational accident insurance to cover medical expenses and income lost as a result of injuries or illnesses incurred while working. “While working” is defined as time spent that a driver was online. In other words, while the driver is using the app and available to receive requests for rides without being engaged in personal activities. At minimum, this coverage will include:

The positions of the California legislature and the app-based rideshare companies became exceedingly clear in their battle for/against AB5 and Proposition 22, but what do the drivers have to say about it?

Joe Renice, a long-time Uber driver operating in the San Francisco metro area, interpreted the passage of Prop 22 as a massive benefit.

“This is a job that I make over $100,000 a year doing. And I have complete and total freedom and flexibility to do that,” Renice stated in an interview with NPR. “We know going in this is a tradeoff,” he said, “but I am willing to give up benefits like a set salary, retirement savings and insurance for the ability to do this when and where and how I want to do it.”

Renice concluded with an acknowledgment of the relative nature of these benefits: “it's not for everybody. Some people are better off being employees. Not me.”

Despite a degree of success in the United States, the pressure never let up for Uber and Lyft to classify their drivers as employees in the European Union. In response, Uber CEO Dara Khosrowshahi wrote an open-letter entitled “A Better Deal” to European lawmakers urging them to reconsider the implications of doing so.

In the letter, Khosrowshahi wrote “after taking an honest look at how our platform has benefited workers—and, importantly, how it hasn’t—we’re committing to change. We believe independent workers across Europe deserve better: work that offers flexible and decent earning opportunities when they want it, and protection and benefits when they need it.”

Instead of attempting to dissuade lawmakers from considering the subject, she says “we believe a new approach is possible—one where having access to protections and benefits doesn’t come at the cost of flexibility and of job creation. We need clear,  progressive laws that recognize the value of this unique type of independent work and pave the way for better protecting it.” She is suggesting that new legislation be implemented but in a way that more closely resembles California's Proposition 22.

However, it seems that EU courts have ruled contrary to the wishes of ridesharing apps despite their efforts. In a ruling on Friday, February 19th, Britain's Supreme Court mandated that Uber treat its drivers as workers. This would give them paid time off, periodic breaks during a “shift,” and a minimum wage, in sharp contrast to the rights gig-workers have as independent contractors under California's Proposition 22.

The regional manager of Uber's Northern and Eastern European divisions has since stated that the company has already begun making “significant changes,” in order to comply with the Supreme Court's ruling.

Why Does This Matter For The US?

Although California's legislation regarding the status of gig-workers seems cemented for the foreseeable future, this ruling may impact the United States in two ways: precedent and expansion. In states that have not yet decided on the matter, a ruling such as the one by the British Supreme court may shape the public sentiment needed to pass legislation that would allow gig-workers to operate as independent contractors.

Additionally, many foreign companies operating under this model now worry that the decision by Britain's Supreme Court has stifled their ability to expand and offer new services to overseas consumers. For example, Sacha Michaud, CEO of delivery app Glovo was planning on expanding his company's operations to the US in the near future.

However, after the ruling he expressed his concerns that the stricter labor laws will “severely limit flexibility” and “have a negative impact on our operations, stifling our geographical expansion to smaller towns and cities, and the impact of that will be felt by local, independent SMEs that aren’t able to offer their own delivery services.”

The push to classify gig-workers as independent contractors has extended well beyond the borders of our country. Only time will tell if foreign rulings influence the sentiment of US voters or stifle the diversity of foreign goods and services offered here. Since the nation as a whole has not decided on this issue, any influence on the matter, be it internal or external, has the potential to play a significant role in predicting outcomes domestically.

Given the complexity of app-based driver auto accident claims, consulting with a legal professional is highly recommended. At the Napolin Injury Accident Law, we examine your case from many different perspectives to provide the optimal legal advice. Getting the right help is of utmost importance.

What does it mean to get the ‘right help'? It means receiving expert advice, medical treatment and damage recovery. An experienced southern California attorney will do exactly that for you. Our legal team is equipped to help you recover all your damages, financial, medical, and emotional. Call us today to schedule your free consultation.