Home » Accident and Injuries » Are Motorcycles Actually That Much More Dangerous Than Cars? 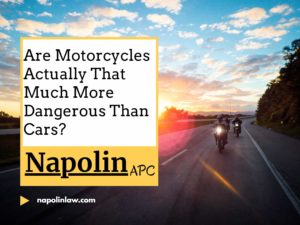 Are Motorcycles Actually That Much More Dangerous Than Cars?

And If So, What Can A Cyclist Do To Stay Safe?

Many who are not already licensed motorcycle riders have at least entertained the thought of riding one. They are cheaper and more fuel efficient than cars and are often seen maneuvering through dense lines of vehicles while others are trapped in traffic. The most common considerations that leads to the dismissal of these thoughts are the associated safety hazards.

But how dangerous are motorcycles really? And if they're as dangerous as we've been led to believe, what can a motorcycle rider to do minimize their risk of injury?

Since 1994, deaths resulting from motorcycle crashes have been slowly but surely increasing. And with the passage of lane-splitting laws, the fear that this trend will continue has only grown. In 1994 there were 2,320 motorcycle fatalities recorded in California. By 2016, that number had grown to 5,286, accounting for over 14% of total vehicular deaths (from 1994's 5%).

It's Not All Bad

When considering the facts associated with motorcycle deaths, the inherent danger of that mode of transportation becomes apparent. But what are possible reasons for these trends? An understanding of their underlying causes may help drivers exercise more caution on the roads.

There are many theories regarding significant contributing factors to the increasing danger of operating a motorcycle, some of the most prominent include:

In What Situations Is A Motorcycle Accident Most Likely To Occur?

This is where awareness could really contribute to a safer driving experience for both motorcyclists and drivers of normal cars. By understanding the most dangerous situations for motorcycles to maneuver in, motorists may be able to take the necessary precautions when they arise. The list below highlights the most common causes of motorcycle accidents:

How To Stay Safe As A Motorcyclist

Although safety is never guaranteed in any vehicles, there are precautions any motorist can take to minimize their risk of being in a serious accident. A motorcycle driver must make sure that they are always operating their vehicle with the proper safety gear on, including a helmet, gloves and jacket.

Additionally, a cyclist should go through the following safety checks before going on a ride:

Further, although the classic tenets of motorist safety go without saying, they need further emphasis for drivers of risk-sensitive vehicles. Always make sure you are sober, awake, and alert before riding a motorcycle. Follow any and all traffic rules.

And most importantly, ride defensively. Like it or not, other drivers tend to consider motorcyclists least when pondering the dangers of the road. This is why it is imperative to not place your trust in other drivers and instead drive on the defensive.

Were you or a loved one recently injured in a motorcycle crash caused by another party? As the article above notes, motorcycle collisions are far too common, and many involved are lucky to leave with their lives despite serious injuries they may have sustained in the process.