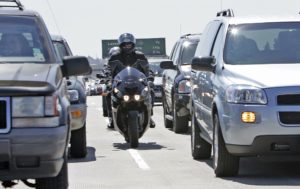 New California Motorcycle Lane Splitting Law Update – Motorcyclists have long been, de facto, allowed to split the lane with other vehicles such as trucks, cars, buses and other motorcycles, to avoid traffic. However, there has always been some confusion regarding whether or not motorcyclists are legally allowed to do so or not. To date, the practice was neither prohibited nor explicitly allowed in California. But AB51 will make California the first state in the United States to transform this current ambiguity in the law. AB51, co-authored and introduced by Bill Quirk (assembly member) and signed by Governor Jerry Brown, defines the practice of lane splitting in legal terms for the first time. It goes on to implement rules in regarding the practice of lane splitting.

Rules Regarding Lane Splitting For Motorcyclists

The California Highway Patrol would like to make the motorcycle lane splitting or otherwise called the lane sharing law effective starting from Jan 1, 2017. In collaboration with the Department of Motor Vehicles, the CHP includes lane splitting guidelines that touch upon the maximum speed motorcyclists can drive while engaged in the practice of lane sharing. Although the older version of Bill included provisions in which speed limits were assigned, Quirk claimed that the California Highway Patrol preferred to engage its own research and conduct its own study instead of relying solely on UC Berkeley’s Safe Transportation Research and Education Center used in the older version of the Bill. 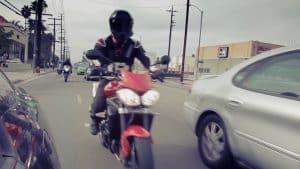 As of right now, the proposed speed regulations that would have forced motorists to share or split the lane with another vehicle (moving or stopped) so long as the traffic speed is not above 35 mph did not make it into the law. Neither did the proposal that motorcyclists not be allowed to drive with a speed that is more than 10 mph faster than the traffic speed. While many critics are concerned about the proposed changes, advocates for the new lane splitting law claim that it will make driving for both motorcyclists and other drivers safer because it the Bill solves the already existing confusion over whether or not lane splitting is legally permissible. In essence, the new proposed lane splitting laws make it easier and safer to avoid major motorcycle traffic collisions that cause property damage, personal injury and death. The CHP now has the authority to develop clear guidelines on when it is safe and not safe to lane split.