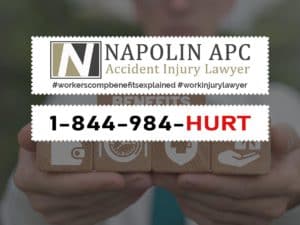 Learn what you get so that you don't experience disappointment at settlement time. The following is what you hope to potentially recover with a workers' compensation claim. Here are the four basic workers' comp benefits listed and explained:

1) Medical Treatment to cure and relieve the work related injury or condition.

The type and amount of medical treatment will be determined by the injured worker's primary treating physician for their workers compensation claim, and will be overseen by the insurance company for reasonableness and medical necessity.

This is a form of wage replacement benefit in the form of money provided to the worker who cannot perform their job while they recover from a work related injury. If a doctor says that the injured worker cannot perform their customary duties and the employer cannot offer modified work within the injured worker's medical restrictions, the injured worker should probably be getting temporary disability benefits. The amount the worker is entitled to is 2/3 of the worker's gross wages, up to a maximum of $1,066.72 per week. A worker cannot collect this benefit for more than two years for injuries occurring 2005 or later.

This benefit comes towards end of the Workers Compensation claim. It is in the form of money. It is calculated based upon a permanent impairment rating assigned by the primary treating physician or QME or AME taking into account other factors including how strenuous the workers job was when he or she was injured and the amount of pay the injured worker was making at the time of the injury. This benefit is awarded when a doctor determines that the injured worker has a level of permanent impairment due to their work related injury. In other words, a permanent injury that has decreased the injured workers ability to compete in the open labor market with other, healthier workers. In theory, the permanent disability rating system approximates the decreased earning capacity of a worker who is now permanently injured.

This is a job retraining voucher in the amount of $6,000.00 that the injured worker may be entitled to at the end of their case. The $6,000.00 is for the worker to use to learn a new skill that is within their ability to perform now that they have a permanent impairment due to their work related injury. There are exceptions that disallow this benefit, and not all workers will qualify for this benefit. As a California Workers Compensation lawyer, I explain to the client what the exceptions are to this benefit and what needs to take place to receive a Voucher.

If you are injured and need your workers comp benefits explained, your next step is a free workplace injury consultation. Napolin Accident Injury Lawyer serves California and is available to take your inquiry. Call 1-844-984-4878 to take the next step toward learning your rights. We are available and all calls are confidential, so there is no risk to you!

Still want to learn more and not ready for a free consultation? Click the button below to learn more about the benefits of hiring a workers compensation lawyer before making the phone call to our office.