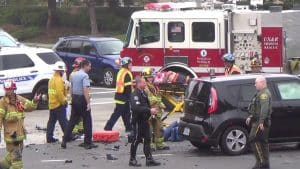 Irvine Explosive Car Accident Leaves Two Dead Two Critically Injured – A fatal car accident ended in an explosive fire on July 1, Saturday morning in Irvine, California. The Orange County Fire Department and the Irvine Police Department rushed to the scene of the deadly crash, where they found a 2015 Infinity Q50 engulfed in flames. The male driver, who has not yet been identified, was taken by ambulance to the local trauma center in critical condition.

The fatal car accident happened at 3:00 a.m. near UC Irvine at the intersection of Michelson Drive and Harvard Avenue in Irvine. The second vehicle involved in the accident was a 2014 Hyundai Elantra. The driver and passenger, Kesean Herrera and Jeremy Shankling of Irvine and Los Angeles respectively, were both killed in the fiery crash. They were pronounced deceased at the scene of the fatal car accident in Irvine. There were also two girls in the car, but they survived and were also taken by ambulance to Orange County Hospitals. The girls were London Thibodeaux and Chanelle Haywood, and a gofundme account has already been created to help with expenses. Both car accident victims remain in critical condition this morning in intensive care and are expected to undergo surgery soon.

The two young men who were killed were beloved local residents, 23 and 24 year old UCI graduates who both worked as software engineers. They were described as having bright futures with a loving family. Friends and family held a candlelight vigil Sunday night at the scene of the tragic crash.

The accident injury attorneys at The Napolin Law Firm extend condolences to the victims and their families as they recover and mourn from the car accident deaths and serious bodily injuries suffered in this fatal car collision. The Orange County personal injury law firm represents people who have been hurt, and the parents of people killed, in these types of tragic car collisions. Any questions can be referred to Alexander Napolin at (714-451.2006.