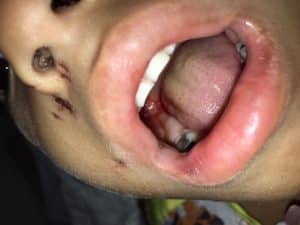 Law Firm Files First Lawsuit Against Anaheim Childrens Dental Group – The Children’s Dental Group in Anaheim CA has been sued by an autistic child who was infected with the mycrobacteria found in the dirty water system of the dental office. The child was forced to undergo unnecessary expensive dental procedures, including multiple pulpotomies (baby root canals), which led to a recent surgery to remove the bacteria infected teeth. During the unnecessary pulpotomies, the autistic child was strapped down on a “papoose boar,” which the Children’s Dental Group refers to as a “hugging blanket.” The autistic child was physically trapped during the procedure.

Napolin Accident Injury Lawyer has filed the first lawsuit in Orange County Superior Court on behalf of the autistic child who was a victim in what is quickly being revealed as a children’s Medi-Cal billing high volume dental operation. At present, Napolin Accident Injury lawyer represents four other children through their parents against the Children’s Dental Group in Anaheim. More than 500 children were exposed to the bacteria filled water during the months of March through August of 2016.  The Children’s Dental Group operates 9 other locations in California. These children had unnecessary root canals after being told by the dentist that it was an urgent medical need. The dirty water remained inside the tooth canal while the dental staff covered the tooth with a crown. The bacteria remained inside the tooth, which grew to attach the tooth, gums and bone. Several of the children remain at Children’s Hospital of Orange County, and many others have undergone surgery to extract the infected teeth, treat the gums, and even remove parts of the jawbone.  High doses of strong antibiotics, which is used to treat leprosy, have been used to treat the infected children.

The autistic child plaintiff, through his parents as guardians, filed suit in Santa Ana Court yesterday, alleging negligence, medical malpractice and battery, among other legal violations. The Dental Board of California has encouraged other victims to report the Children’s Dental Group of Anaheim if they  have concerns about the treatment or care of the child. Last week, the Orange County Board of Supervisors voted give $150,000 to the Children’s Hospital (CHOC) to treat the growing number of children infected by the water at Children’s Dental Group.

Parents of children who were treated at The Children’s Dental Group, located at 2156 East Lincoln Avenue in Anaheim, are encouraged to seek legal representation from Napolin Accident Injury Lawyer in Anaheim, Orange County County, California. “The children who are infected by the Children’s Dental Group in Anaheim are in for a long process of observation, testing, surgery, medication and treatment.  This is a life changing injury and we are investigating their legal options,” said Alexander D. Napolin, Esq,, a child personal injury attorney who is representing several of the children infected by the unneeded pulpotomy treatments.  It is expected that the families will file claims and lawsuits to obtain personal injury damages compensating them for their injuries. Mr. Napolin’s Law Firm Files First Lawsuit Against Anaheim Childrens Dental Group and is available to help you, call (714)451-2006 for representation.