Rain is officially the Most Dangerous Weather to Drive in, Beating Out Hazardous Driving Conditions Arising From Snow and Ice. 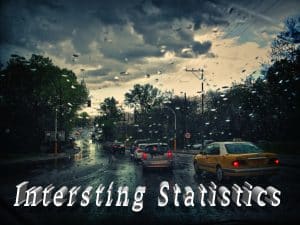 Rain Officially Most Dangerous Driving Weather Condition – Rain is officially the most dangerous weather to drive in, beating out both snow and ice as hazardous driving conditions. According to the California Highway Patrol, the National Highway Traffic Safety Administration and the Automobile Insurance Center, rain causes more driving fatalities than snow in 39 of the 50 states. On the Los Angeles freeways alone, there were 110 automobile collisions on Monday morning between 5:00 a.m. and 10:00 a.m.

It was discovered that drivers are not as cautious as they would be if they were driving in snow or on icy roads. On Southern California roadways, we get rain, not snow. The rain usually makes the pavement slick, due to the oil residue building up during the long dry periods. Another dangerous driving condition caused by rain is the impaired visibility caused by the wet roadways.

Recommendations for safer driving during the rain storms include to drive slower, keep your eyes focused on the road far ahead of you, do not slam on the brakes which causes skidding, keep your window defogger on, avoid large puddles or flooding water which can cause hydroplaning, and drive defensively.

The rain storm in Los Angeles and Orange Counties is in full swing this week, with the consistent rain expected to continue through Thursday night. With car accidents expected to increase as the storm continues, the CHP is warning drivers to follow the driving recommendations to avoid a roadway collision.

Even though the cause of a car accident might be due to the wet roadways, it is still the drivers responsibility to drive safely and not crash into another automobile. If you have been involved in a car accident in the rain and you are not at fault, you should hire a lawyer to represent your interests and seek compensation from the insurance of the driver at fault. The Napolin Law Firm Orange car accident attorney aggressively fight insurance adjusters and obtain compensation for their clients. If you have been hurt in rain weather condition in a crash, call (714) 461-2006 for a free consultation and the answers that you need.