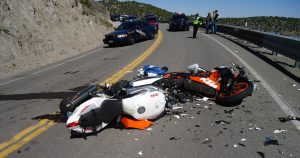 Spring Motorcycle Weather Brings Increased Motorcycle Accident Injury – Motorcycle season is upon us once again since the warm weather has arrived. Motorcycle accidents laid dormant during the cold rainy season and are waking up. Police research data reveals that the two leading causes of motorcycle accidents are unsafe speed and driver inattention. More than two-thirds of motorcycle crashes involving vehicles occur when the vehicle’s driver fails to see the motorcycle. More than half of these crashes occur at intersections. Solo bike crashes involve excessive speed and inexperienced riders.

A motorcycle vs. car accident started the season of crashes on Monday night in Anaheim at about 7:45 p.m. On Lincoln Avenue in Anaheim, between Brookhurst and Empire Street, a motorcyclist was struck by a Honda Civic, which put the biker down on the pavement. The rider was rushed by ambulance to UCI Medical Center in Orange, California, but he was later pronounced dead. His identity has not yet been released. The driver of the car was a female who was given field sobriety tests, questioned, and cleared from suspicion. Anaheim Police do not suspect that drugs or alcohol were involved in the fatal motorcycle crash. Lincoln Avenue was closed between Brookhurst and Empire streets during the investigation.

Orange County, California is beautiful and warm, and is filled with motorcyclists on the streets and highways. The OC traffic is hazardous, and bikers should take extra precaution to drive defensively to protect themselves from being struck by a vehicle. A bike crash often results in instant death, since the biker is unprotected from the impact and crash to the pavement. Motorcycle riders should wear protective gear and watch for inattentive drivers. When they are struck by a car, serious injuries usually occur. Call an accident injury attorney immediately so that the claims process is done correctly. The first few hours after a motorcycle traffic collision are crucial to take the proper legal steps. The Napolin Law Firm represents motorcyclists who are struck by a car and injured. The experienced motorcycle lawyers can be reached at (714)451-2006 in Orange, California.