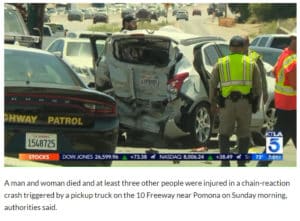 A 66 year-old woman and a 91 year-old man passed away in a deadly crash the happened on Sunday morning near Pomona on the 10 Freeway. Police report that an additional three people were injured during the chain-reaction crash arising when a pickup truck made an unsafe lane change.

This 5-vehicle-collision happened just before 9:00 AM on the 10 freeway westbound near Via Verde Avenue. The first impact was between the 2017 Ford F-550 pickup truck and a Toyota Sienna Minivan. The second impact was between the F-550 and the back of the 2013 Buick Encore SUV. The impact pushed the Buick forward into the back of a Nissan pickup truck. The Nissan, in turn, was pushed forward into a charter bus.

An 86-year-old woman who was riding as a passenger in the Buick reported with a broken hip and ribs. Only minor injuries were reported for the 32-year-old man who was also involved in the 5 car collision. All four people inside the Buick were described as Corcoran residents.

The large-massive F-550 was being driven by a 49-year-old Anaheim man at the rate of 70 to 75 mph at the time of impact with the Buick. He reportedly made “an unsafe lane change” as traffic was slowing ahead of him, according to police.The male passenger of the Ford-550 was treated for minor injuries, according to the CHP.

The impact pushed the Buick forward into the back of a Nissan pickup truck. The Nissan, in turn, was pushed forward into a charter bus. No injuries were reported to people inside the minivan, the Nissan truck or the charter bus.

The cause of the crash is being investigated by the CHP’s Baldwin Park-area office. Anyone with information can reach the office at 626-338-1164.

California Highway Patrol announced a SigAlert for the left three lanes of the I-10 just before 10 a.m. The lanes were all reopened shortly before 1:30 p.m.

Have you been hurt or have you lost a loved one on the freeway in Pomona California? If you face legal problems, Pomona Accident Injury Lawyer is here to help you through this difficult time. Learn how our office takes care of our clients for free with a confidential and free initial case consultation. We know how to prosecute automobile accident claims and hire the best experts to prove the case. Let our knowledge of insurance claims and personal injury automobile accident litigation help you through difficult times. Call 844-984-4878 to get started today. Pomona Area 10 Freeway Crash Leaves Two Dead Multiple Hurt.